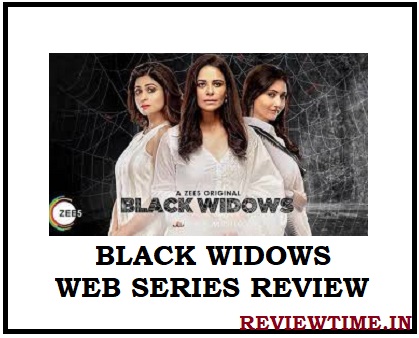 When bitterness, torture, and generosity are filled in the relationship, the person thinks to be free from it. But this freedom is not being taken in any wrong way. No conspiracy is being hatched for this. One such story is Black Widows, directed by Birsa Dasgupta, which has been launched on ZEE5. This web series is full of suspense and action along with being a comedy-drama.

If there are thrill and suspense in a story, then the viewer is tied to that story till the end. The funny thing is that the audience not only enjoys this kind of story but also seeks out the murderer. Talking about the story of Black Widows, it is the story of three wives (Veera, Jayati, and Kavita), who are very upset with their husbands (Jatin, Lalit, and Nilesh). So upset that they plan to murder them and their husbands are killed in a blast. But as the wives thought that their husband would die, the whole problem would be solved. It did not happen, she was wrong. They do not know that Jatin (Sharad Kelkar) has escaped in the blast.

Now, who did this blast and why, no ordinary person will investigate this. Therefore, the police carry the investigation of this entire incident on their shoulders. It mainly stars Insparker Pankaj (Parambrata Chattopadhyay) and Inspector Rinku (Shruti Vyas). The two commit their lives to capture the murderer, but gradually they discover that the case was easier in the beginning, the later it became more complicated. Despite this, the process of reaching the bottom of the case continues.

On one side, where the police are looking for the killer, on the other hand, Jatin’s partner Rameez’s different story goes, he looks for the money that Jatin had. Meanwhile, the story also stars Eddie (Aamir Ali), who is a single father and tries to make his mark on Veera. The story has love, suspense, action, and drama. It remains to be seen whether the police are able to find the culprits of the blast.

Mona Singh suits in the role of Veera who is the wife of Jatin. She plays the role of a wife who is scared after the death of her husband but also works wisely. She knows how to face the police. Swastika Mukherjee as Lalit’s wife has also influenced the audience by her performance. There is more stagnation in her acting. She seems to have received the most wounds from her husband. Shamita Shetty is the wife of Nilesh. Her character in the role of Kavita is slightly different from the rest. Her character has less seriousness, which she plays well.

We all know that Sharad Kelkar always impresses with his performance. His role as Jatin in Black Widows is quite impressive. His facial expression and dialogue delivery have always been impressive. By the way, Parambrata Chattopadhyay is also no less in terms of influencing. He got his acting iron in 2012 only from the film Kahaani. As far as Shruti Vyas is concerned, she is also looking very good as a Lady Inspector.

Saheb’s role in the web series is also very funny. He has played a tremendous role as Rameez. You will definitely be impressed by their dialog delivery. On the other hand, Aamir Ali has also managed to leave his mark as a single father. It seems that he has captured his character properly. His character is doing the kind of acting he is demanding. While Raima Sen is very much in the role of Inaya Thakur. Her character in the web series creates many mysteries. How his mysterious role turns in the story will be known only after watching the web series. Apart from this, Faisal Malik and Nikhil Bhumbari have also been cast in their respective roles.

Black Widows is shot in Kolkata and is very well served to the audience by Birsa Dasgupta. As a DOP, Shubhankar has tried his best to take good scenes throughout the series. It is edited by Sumit Chaudhary. Black Widows depicts the female character very well. It is a well-known international show, produced by ZEE5 in India. If you like suspense stories with dark humor, then this web series is for you.