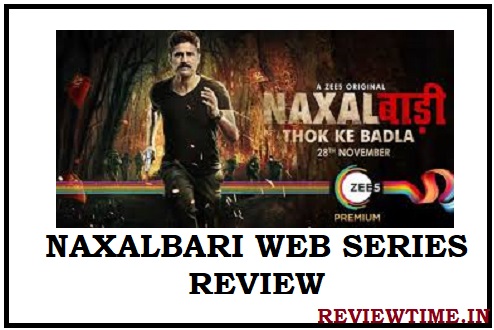 The conflict between Naxalites, industrialists and the government is very old. All three have their own agenda, which they try to fulfill. In between all this, political parties also find their point in it. Naxalbari is one such story revolving around Naxalism, industry, and politics, which is made under the direction of Partho Mitra. This web series has nine episodes will be shown on ZEE5 Original.

A film or web series, its story becomes funny when there is suspense in it. The story of Naxalbari is not as easy as it seems. The incidents and the characters related to it are so entangled that the policemen have the power to solve it. But our clever STF agent Raghav Joshi (Rajeev Khandelwal) how he was a loser. He exposes suspense with his style, that too with full action. That is until the end of the last war in the war. Raghav Joshi, son of Mumbai Police Commissioner Satish Joshi, believes that it is wrong to take up arms in the name of justice because war is not the last way.

The story of Naxalbari begins in Gadchiroli, a Naxal-affected area in Maharashtra, where the ruling party’s MLA and a few others are killed by bombs. Naxalite leader Binu Atram (Shakti Anand) is involved in this heinous massacre. There are many young and eccentric people in Binu’s gang, who support him in his works. Pahan (Satyadeep Mishra) and Prakriti (Shreejita Dey) are two of his gems who are ready to do anything for him. The responsibility of stopping the Naxalism rising in Gadchiroli rests on the shoulders of Raghav Joshi and his team. This mission of his is very dangerous. To accomplish this, they also lose their close ones. However, despite all the difficulties, his girlfriend Ketki (Tina Dutta) does not leave him.

When Raghav Joshi’s team investigates, it is found that the wire of the Gadchiroli attack extends from the forest to the city. The entire conflict revolves around the thought of an industrialist Sisodia, who is trying to set up a mining plant in the forests of Gadchiroli. There is also a suspense character in the entire story, named Baba. It is Baba who is instructing Binu.

The characters gave a tremendous performance:

All the actors in the Naxalbari web series have impressed everyone with their character. The web series stars Aamir Ali, who has entered the digital world for the first time. As a businessman, he has won everyone’s heart with his character. Kesavani, Aamir’s interesting character in the entire web series, is a surprise package. You have to watch Naxalbari know how his acting and his character changed the game in the last episode.

Rajiv Khandelwal is making a lot of money as an STF agent. His specialty is that any character is given to him, he puts life into it by his performance. Tina Dutta as Rajiv Khandelwal’s girlfriend looks quite credible in her character. She works as a translator with various government agencies. The character of actor Shakti Anand also looked very powerful. He leaves his influence as a Naxalite Binu. In this, Sreejita Dey and Satyadeep Mishra have supported them very well.

Director Partho Mitra has shown action and suspense very well in the story. Hari Nair as cinematography and Pulkit Rishi as screenplay have managed to show their talent. The web series features real action and action director Ejaz Gulab has done a good job in it. Talk about the original background score, then Paresh Shah appeared to be successful in it. The producers of the web series are Arjun Singagh Baran and Karthik Nishandar.

Overall, Naxalbari can be said to be a good web series for viewers who seek real action and unresolved suspense in the digital world. The characters with the story will find them so interesting that they would like to finish the entire web series in a day.