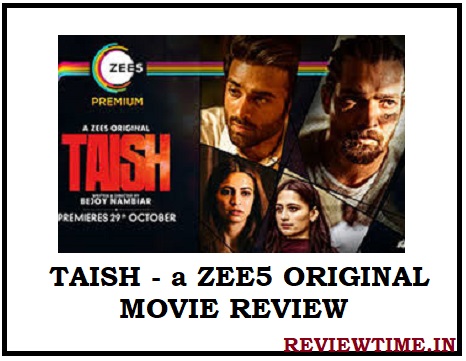 We have been hearing this fact that the decision made in the trunk or in anger is harmful to the person. In the series ‘Taish‘ of 6 episodes, it is shown that Sunny Lalwani (Pulkit Samrat) is unable to control her emotions. When he hears that his friend Rohan Kalra (Jim Sarbh) was physically abused by Kuljinder (Abhimanyu Singh) as a child, he beats him so much that he is no longer able to walk and speak.

Kuljinder is from a gangster family. When they come to know about this, Pali (Harshvardhan Rane) follows Sunny and Rohan and both of their families are in danger.

Pali also has his own story. He wants Jahan (Sanjeeda Sheikh), who is married to Kuljinder. Controversy continues in Pali and Kuljinder about this too.

Rohan has a Pakistani girlfriend and has come to attend his younger brother’s wedding. His family does not accept this girlfriend and even small disputes continue in the marriage environment.

The story is written and directed by Bijoy Nambiar. Bijoy is of course a very good technician. Specializes in taking shots. But the story is his weakness and it has emerged here too. If technology dominates the content, then it cannot be made and Taish also gets entangled with this weakness.

Bijoy has presented the story in a very twisty manner. They have taken the story of ten days back and forth several times, except that nothing of confusion is produced. Bijoy has tried to confuse and surprise the audience with his presentation, but it did not materialize.

There is no synergy in the opening scenes. Why is all this happening, how are you getting involved in this? Although curiosity definitely arises as to what will happen, as soon as all the points are added, the graph of ‘Taish‘ comes down sharply and this curiosity ends.

Rohan, his girlfriend Arfa’s character comes out, but why the main character Sunny is so angry, it has not been told. Sunny seems less angry and more intelligent, so it is difficult to believe that he can be so fierce to kill someone. This thing comes into mind when watching ‘Taish‘.

Pali and Jahan’s love story also loses its influence after a time.

The good thing is that the talk is finished in 6 episodes and each episode is about half an hour. The series ends before boredom starts to dominate too much.

Pulkit Samrat is often a victim of over-acting, it has decreased in ‘Taish‘. Jim Sarbh has done excellent acting and portrayed his complex character well on screen.

Harshvardhan Rane has done justice to his character. Kriti Kharbanda, Abhimanyu Singh had nothing much to do.

Overall, only the packaging of Taish is attractive.