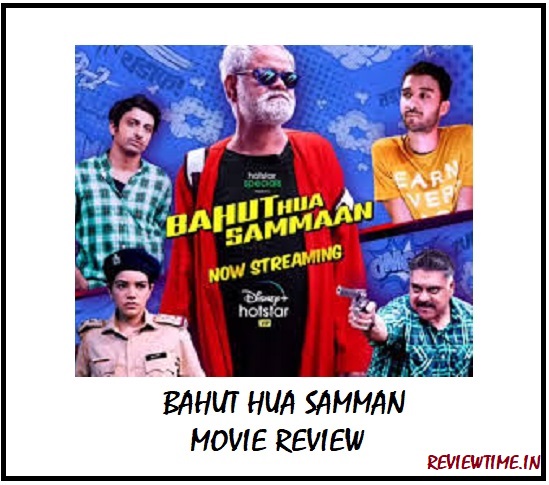 At the age in which you should prepare for a bank job, at that age the boys plan to rob the bank, then it is their problem or the system. This film, which starts with this question, brings out many things. It also shows the politics and rigging of our time which can prove to be harmful to society tomorrow.

Games are not only played behind the scenes in cinema but in democracy films too much is also cooks behind. People in power and system want to grow themselves and keep the public behind. This film is the story of such a system, which has been respected a lot till date.

Here two of the worst students of mechanical engineering at North India University in Varanasi, Boney (Raghav Juyal), and Fundu (Abhishek Chauhan), lagged behind the boys from the batch. They see that the fifth pass in the country is earning crores and the 9-to-5 graduates who find the future do not have jobs. Meaning the problem is in the country, not in the youth. Boni-fundu, who seems to be misguided, gets his knowledge from Baba (Sanjay Mishra), who has been living on the campus for 25 years and seven months.

Bony-fundoo is at the center of the story but Baba has complete control over it. He is the mastermind of everything and all the philosophy is in his pocket. He explains that banks are the womb of capitalism and that instability is the mother of invention. Baba says that Revolution is not a two-and-a-half-hour film. Revolution in a democracy must be continued. If the flow of revolution is stopped, the river of ideas will become a channel of fundamentalism.

The good thing in a democracy is that people have the right to ask questions. If people do not raise their voice, they will remain as devotees. Become a partner, not a devotee because this country is yours too. Sanjay Mishra has played his role very beautifully.

This film, which came on the Gandhi Jayanti on Disney + Hot Star, says in a lot of gestures on the present situation of the country, politicians, criminals, and businessmen babas. Raises mask on faces. In a very sensible gesture, the story tells that today religion is being used like opium and a big market has also been erected under its guise. If people do not warn today, then perhaps the time will come when the power of thinking and understanding will be taken away. Consumption of consumerism and religion will cripple people and machines will replace humans in factories and offices. What will happen then A new slavery will begin.

The special thing is that the film says these things in a style like comedy and fantasy. The music of the 1970s- 80s in the background acts as a sweet layer on the bitter pill. It is a different matter that it is full of words that cannot be written here, but the film makes you laugh and forces you to think. In the film, there is a Kohinoor robbed from the bank, whose mystery thrills. Here is an interesting track of Bobby Tiwari policewoman (Nidhi Singh) and her husband working in the education department.

Despite the speed of the film being somewhat slow, in the end, it moves at a fast pace. Ashish S. Shukla kept the balance in the characters and showed the wisdom to finish the different tracks of the stories on time. In recent times there have been fewer such directors who tried to say something in parallel gestures of the story. Otherwise, most of them run flatly.

Writers have also done their job well. You can agree or disagree with what is shown in this film, but you can see it for an experience.