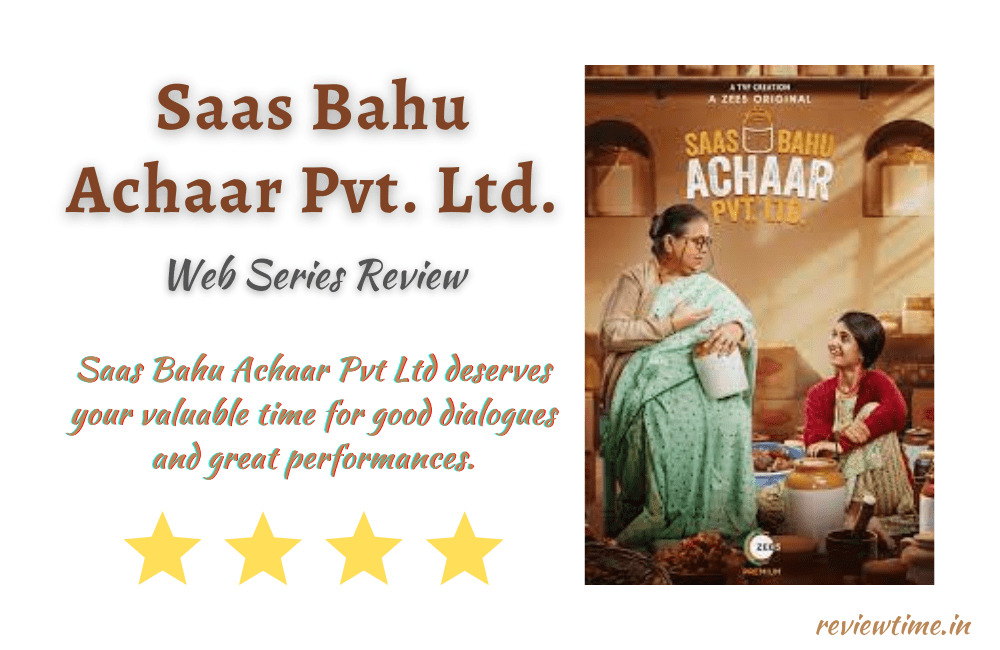 ‘Saas Bahu Achaar Pvt. Ltd.‘ web series is the story of Suman. She is separated from her husband Dileep. His children live with the father. He has to take the children with him, but there is a shortage of money. Suman has not done anything in life other than running the house. It was taught to him that gets married, the car will come, and whoever takes him in it will take care of everything. But there is no one to handle it now. She is not even educated, but she knows how to make pickles. So for the money, she starts a pickle business. But while doing all this, Suman’s prime goal is to have the courage and money to keep the kids with her. Now what does she do for this and how does she do it? This is the main plot of the whole web series.

Apart from this, many characters have all plots and all have their own stories. Like Shukla Ji has his own life story. But he keeps on teaching Suman positivity. Suman’s mother-in-law has concerns about her daughter-in-law and children. Manisha, who is Dilip’s second wife, also has her struggle in life, she is a stranger in her own house. What is the effect of being away from the mother on Juhi and Rishu? How do children take the wrong path? According to Suman’s mother-in-law, ‘Children grow up in poverty, but they do not grow without love and affection.

The humanitarian approach of this series is good. What is going on in their mind when the characters are dealing with a complex situation? What troubles are bothering them? How can a broken family reconcile? And how can they be dealt with maturely? All these things are an important part of the series. Since it is produced by TVF, you can expect many heartwarming nostalgic moments from it and the series does not disappoint you either. All the moments make this series emotionally rich. The series works on the details of the characters. Carries out character-building layer by layer. How a woman who knows nothing becomes a capable businesswoman.

Amrita Subhash is in the lead role in this 6 episode show that is being streamed on Zee5. She has tried to keep herself as real as possible. You don’t even see her acting on the screen at all. She has played the character of a typical Indian woman very well. Her nervousness at the beginning of the series and her confidence towards the end can be felt on Amrita’s face. Yamini Das has looted the gathering in the role of Suman’s mother-in-law. She has done a great job in the role of a mother-in-law who considers her daughter-in-law to be her daughter. Anandeshwar Dwivedi is also good in the role of Shukla Ji. We have seen them in many videos of TVF and TSP earlier. His approach is exactly like those videos. Anoop Soni has done a good job in the role of Dilip. Expected better from him.

Anjana Sukhani has presented the maturity and understanding of Dilip’s second wife Manisha in manner. Manu Bisht, who became Suman’s daughter, has also done a good job. Nikhil in the role of Rishu probably could have acted better. In the small role of reporter, Ankit has acted like a notice.

The best thing about this series is its dialogues. Like you are reading a book and want to underline its quotes. There is a scene where Shukla Ji is drinking alcohol and Suman Ji is also drinking with him for the first time today. The dialogues of both are worth writing and decorating on the desk. All dialogues are the life of this series. Their special thing is, that they seem comfortable. Nowhere do you feel that knowledge is being given to you.

TVF Aspirants director Apoorva Singh Karki has taken over the direction of the direction. He has worked on the smallest detail. When you look at Suman’s hands, especially her nails, you will find pickle masala stuffed in them. Yes, there are some continuity errors too, but they don’t matter. There is a scene in the last episode, in which Suman and Dilip are sitting at the dining table trying to resolve their differences and move forward on different paths. There is a shot in it, where they are shown from outside two different windows. Like their relationship, there is a partition in the middle of the window. What a beautiful experiment. It makes my heart happy to see that the director and cinematographer have thought to this extent.

The cinematography of this web series is also good. Natural light has been used very carefully. Morning sequences look beautiful. Old Delhi montages are very nice and new. The music of Nilotpal Bora is such that if you are listening loudly, no one will ask you to slow down.

More or less good work has been done in all the departments. If you just shortened the screenplay a bit, it would have been fun. Well, Saas Bahu Achaar Pvt Ltd deserves your valuable time for good dialogues and great performances. So it’s the weekend, watch this feel-good series being streamed on Zee5.