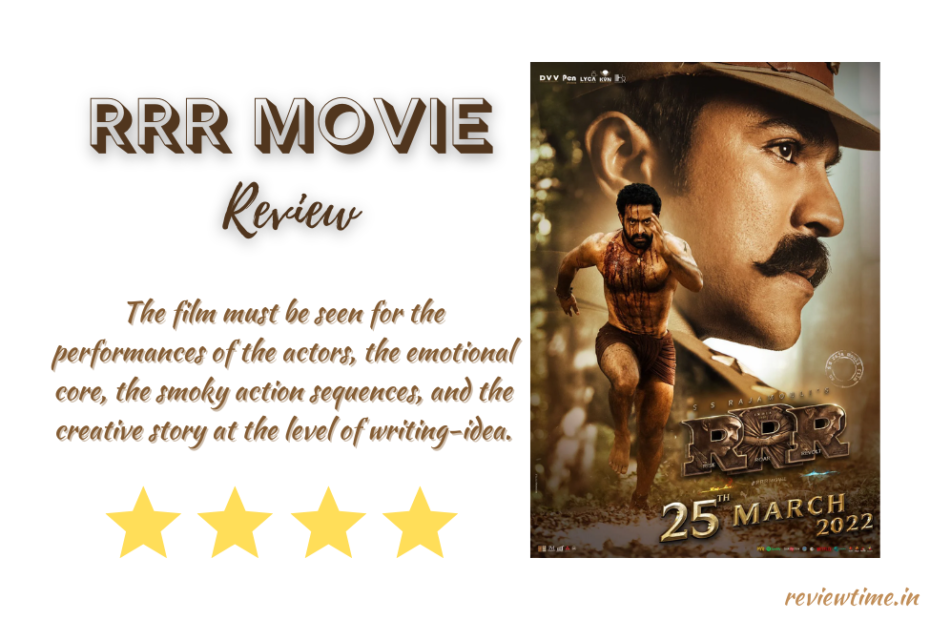 SS Rajamouli’s RRR has finally been released in theaters after a long wait. RRR is a fictional story of two real-life freedom fighters Alluri Sitarama Raju and Komaram Bheem. Sitaram Raju and Komaram Bhima, despite being contemporaries, never met each other. What if they could meet each other? RRR explores this idea in a cinematic way. Seeing this film, you understand that when a filmmaker has a clear vision and has a craft, then a wonderful film can be made even on a simple story.

The story of RRR takes place in 1920s Delhi. There is an officer named Rama Raju in the British Police Force. He wants to reach the rank of Special Officer as soon as possible. After reaching there, he wants to complete the work left unfinished by his father. On the other side is Gond leader Komaram Bhima. He is living in Delhi under the name of Akhtar. His plan is to enter the Governor’s House. British officers had held his sister hostage, who is imprisoned in the same house. These two resemble each other by their fake names. Bodybuilders become friends in no time. Now they have to remove all the obstacles in the way to reach their respective destination. And what will happen when Raju and Bheem come to know about each other’s reality?

The funny thing about RRR is that it is a mixture of fantasy, mythology, and reality. The people whose story is told are real. The way this story happens is fantasy. The names of the characters in the film are Ram, Sita, and Bhima. Bringing Ramayana and Mahabharata together adds a touch of mythology to the film. We have seen the mixture of fantasy and mythology in films all over the world. But the way this film connects itself with reality makes it special.

RRR is a full-on masala entertainer. It is known to the creator and also to those who see it. There is no curtain. This thing keeps the makers free from all the restrictions. He can show anything in his film and you can’t find fault with it. Yes, even after all this, if there is a lack of entertainment quotient in the film, then your complaint can be heard. But RRR does not give you any such opportunity.

This is a film of a little over three hours. The first half is about two and a half hours long. But it is so entertaining and visually rich that you don’t even know the time. RRR is the rare film that came in the last few years, whose first half has become so spectacular. There is a feeling of slowness in the second half of the film. But in the last half-hour, the film removes all your complaints.

There are more feeling things than watching movies. Unless you can make the public feel something, you will not be able to connect with them. Special care has been taken in this film. In this platter of a film named RRR, you get everything from family bonds to romance and bromance.

The heroes of RRR are normal human beings. But their treatment is like a superhero. In that sense, this film is the origin story of Ram Raju and Komaram. Ram Charan has played the role of Rama Raju in RRR. Ram Charan performs with the eyes more than the body. He is a man with brains. He knows what he is doing and why. NTR Junior has played the role of Komaram Bheem. There is a child-accessible playfulness in the character of Bhima. The name of that character has been carried to the physical level. His mind does not move much but he can do anything with his body. Innocent too much.

Ajay Devgan appears in a guest appearance in the film. Meaning this is not the best cameo. But his character is an important part of the narrative. He is a well-written character, which Ajay Devgan plays in a weighty manner. Alia Bhatt played the role of Sita, Ram’s fiancee. But Alia doesn’t have many scenes. Ray Stevenson plays the main villain of the film, Governor Scott, and Alison Doody as his wife. Olivia Morris plays Jenny. She is probably Governor Scott’s daughter. Of all the women in this film, Olivia has got the most screentime. His screen presence is huge.

RRR is a film made on a grand level. When you see this story happening on screen, you get the impression that you have never seen anything like this in an Indian film. Including ‘Bahubali’. The idea of coordinating the dance and action sequences of the film is amazing. We have always had a problem with the quality of VFX work of Indian films. But this film looks flawless on screen. Along with the visuals, the film must be seen for the performances of the actors, the emotional core, the smoky action sequences, and the creative story at the level of writing-idea.