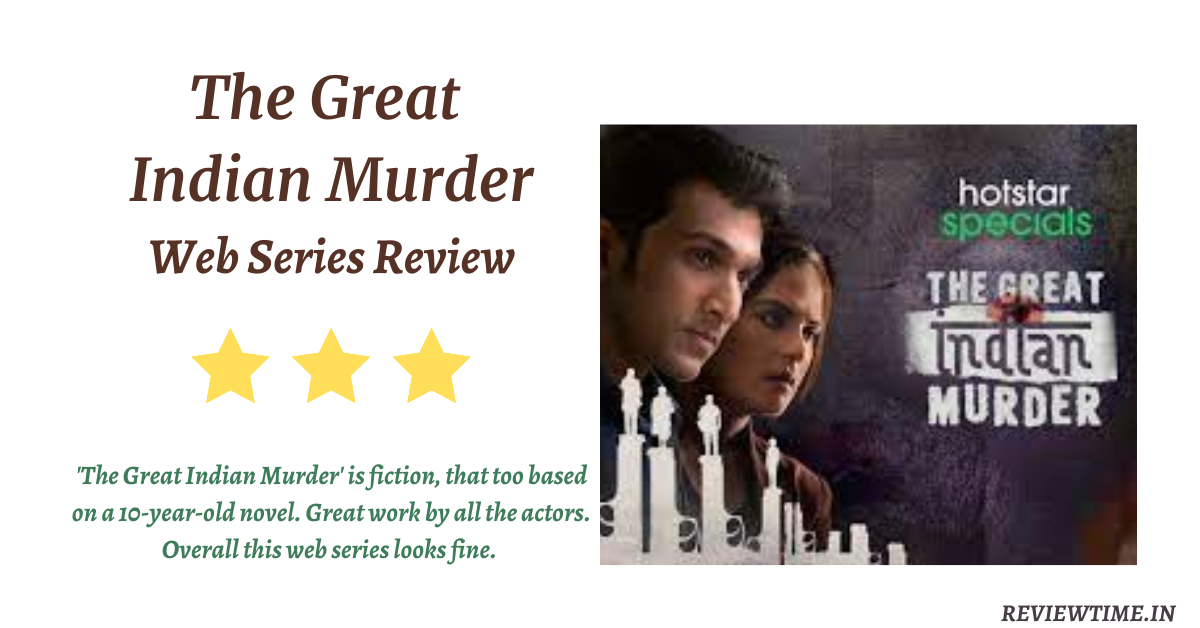 The new series has been released on Disney + Hotstar. Its name is ‘The Great Indian Murder‘. This series is based on Vikas Swarup’s novel ‘Six Suspects’.

The story of ‘The Great Indian Murder‘ begins with the murder of a wealthy businessman named Vicky Rai. Vicky is the son of Chhattisgarh Home Minister Jagannath Rai. But this is not his only identity. He is a spoiled and successful businessman of the Casanova type. Vicky is accused of rape and murder of two girls. This case goes on for three years. But Vicky survives because of his father’s political reach. He holds a party at his Delhi farmhouse to celebrate his release. At this party, Vicky is shot and killed.

The police immediately come into action. She investigates the guests present at Vicky Rai’s party. From whomever the gun was recovered, interrogation is started from all of them. This includes the petty theft-wielding Munna. Ekiti, a resident of Andaman, is searching for the lost idol of his god. Bollywood actress Shabnam Saxena. Mohan Kumar, a retired bureaucrat struggling with a split personality, believes he is Mahatma Gandhi and Welfare Officer Ashok Rajput. All of them have one thing in common. They all have a strong reason to kill Vicky Rai. At the behest of Vicky’s father Jagannath Rai, the investigation of this case is handed over to the CBI. CBI officer Suraj Yadav and Delhi Police officer Sudha Bharadwaj investigate the matter.

‘The Great Indian Murder‘ begins at full speed. How the first two episodes turn out, I do not know. After that, this story starts opening ‘like an onion. The backstory of each character is told. Then the story of that murder night is shown from their point of view. During this, the reason for his enmity with Vicky Rai also comes to the fore. Because of so much detailing, you get involved with the story. The story that begins with the investigation of a murder case becomes a case study of the Indian political system. In Vikas Swarup’s novel, this story takes place in Uttar Pradesh. But in the series, it has been shifted to Chhattisgarh. Because when you have quality content, what’s the need for controversy!

Hearing the title ‘The Great Indian Murder‘, it seems that this series talks about murder. But while watching the series, you realize that you have been cheated. Because this series talks about India with the help of murder. There are two very strong characters in this story. The first Ekiti, whose idol of God has been stolen. He travels from Calcutta to Chennai, Jharkhand, and Delhi to find her. But he talks the least in the entire series. Because he does not know both Hindi and English languages well. The second character is that of a politician named Ambika Singh, who knows only the language of politics. These are two very contrasting characters, but very important. The India that this series talks about, divides India into two parts.

How a murder case can change the politics of the entire state, you get to see it in ‘The Great Indian Murder‘. Jatin Goswami has played the role of Vicky Rai in the series. This is out and out negative character. In the trailer of this series, it was shown that “I am Saary” has been written on Vicky’s back. In the series, you are told its backstory, which is very scary. Then you understand why Vicky is the way she is. However, nothing can justify his actions. Jatin Goswami has created full-on in the role of Vicky. When an actor enjoys his work, it gets reflected on the screen. Looking at Jatin, you get that same feeling. Munna Tripathi from ‘Mirzapur’ seems to be the reference point of that character. But Vicky Rai has become more menacing than Munna.

Ashutosh Rana is in the role of Vicky’s father Jagannath Rai. Actors like Ashutosh Rana are known to give life to any role. You see that thing here too. Raghubir Yadav has played the role of Mohan Kumar, who according to his convenience becomes Mahatma Gandhi. Sudha Bharadwaj has become Richa Chadha, who maintains her ground amongst all the veterans.

Prateek Gandhi has played the character of CBI officer Suraj Yadav. Prateek should now stop calling him a ‘Scam 1992’ fame actor. Because this man takes his performance up a level in every film or series. These are the characters that you keep seeing throughout the series. In the midst of all this, Vineet Kumar should have a special mention in the role of Ambika Singh. Because the length of his role may be less. But its effect is visible on the whole story. And that’s a wonderful job he has done.