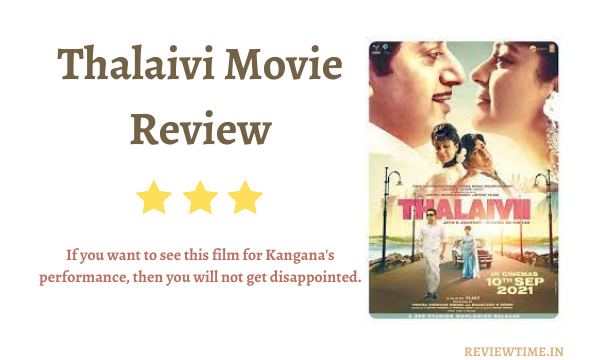 Kangana Ranaut’s Jayalalithaa biopic ‘Thalaivi‘ has been released in theatres. ‘Thalaivi‘ is a Tamil word, which means leader. Here this word is being used in the political backdrop. ‘Thalaivi‘ is a film based on Ajayan Bala’s book of the same name.

This is the story of a Tamil girl named Jaya, who is forced to act in films. There he meets a popular actor and political leader named MGR. Despite being very old and married, Jaya falls in love with him. With their help, she enters politics. This thing does not seem right to the men around him. What is the best way to silence a girl? Point a finger at her character and silence her. But in the Legislative Assembly of the state, not only the finger is pointed at Jaya’s character, but she is molested in the assembly. On that day she swears that she will step into the Legislative Assembly next time only when she becomes the Chief Minister of the state. This film only shows the journey of Jayalalithaa till she became the Chief Minister.

Jayalalithaa was a larger-than-life character. People see them that way. But the film works to limit that character. From the friendship of Karunanidhi and MGR to the political rivalry is shown. But Jayalalithaa’s character gets stuck between these two characters. Jayalalithaa was a woman who rose to the top after fighting misogyny from the Tamil film industry to politics. The relevance of this basic thing was as much as it was then, it is the same even today. But director A.L. Vijay ignores Jayalalithaa’s struggle to reach the sensational events that happened to her and move on. Had those incidents been broken into such scenes, in the backdrop of which you could see Jaya’s struggle and personality, even then there would have been a point. But nothing like this happens here.

‘Thalaivi‘ seems to be a film mounted on a large scale. Every effort has been made to make every scene and sequence grand. But Jayalalithaa’s character has been shown in such a superficial way that all this appearance seems hollow. ‘Thalaivi‘ is a film made about a political figure.

Kangana Ranaut has done wonders in the role of Jayalalithaa in this film. It is a surreal experience to see her in Jayalalithaa’s character. But that character is never seen standing on its own. Everything in his life is happening because of others. She seems to have a second lead role in Jayalalithaa’s biopic. Arvind Swami seems to be the most well-casted actor in MGR’s film version MJR’s Rose. MGR is known for its trademark gestures and style. His manner of speaking was also very different. But Arvind does not try to copy him. This thing has saved his character from being caricatured. Nassar has played the role of M. Karunanidhi. Raj Arjun has played the role of RM Veerappan aka RNV in the Hindi version of the film.

If we talk overall, ‘Thalaivi‘ had ample opportunity to become such a biopic, whose examples were given. But ‘Thalaivi‘ misses this opportunity by a huge margin. If you want to see this film for Kangana’s performance, then you will not be disappointed.