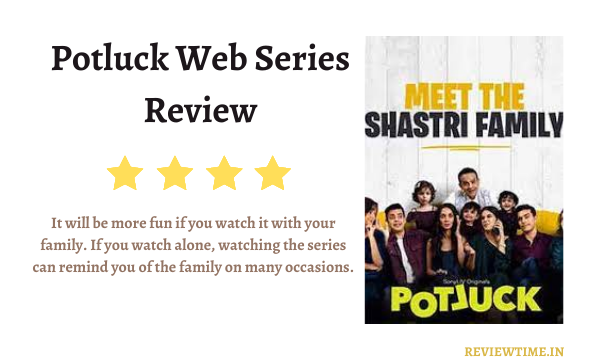 Big dreams….want to fulfill them…distances in the family arise from those dreams. It has become a typical middle-class life. There is a family to say, but now dreams have dominated. The goal is to earn more money by completing them. Now in the midst of those big dreams, director Rajshree Ojha is trying to explain the real meaning of family, who has brought an eight-episode series Potluck. How successful have been, keep reading… you will know

The story of the Shastri family. High middle-class family. Life is going well but everyone is competing to achieve more. In the midst of all this, Govind Shastri (Jatin Sial), the eldest head of the house, wants to bring the whole family back together. Efforts were made earlier also, but could not bring the family with big dreams together. Now Govind devises a strong way to complete that mission. heart attack. An excuse but enough to win the sympathy of the family. The whole family gets worried, the children with big dreams immediately start thinking about the father.

Then Govind announces that now every week our whole family will meet at Potluck. Potluck means pool party…the party where everyone makes something and takes it and then a picnic-like atmosphere is created.

Govind has a total of two sons and a daughter. The eldest son is Vikrant Shastri (Cyrus). His wife Akanksha (Ira Dubey) and his three children. The second son is Dhruv Shastri (Harman Sinha) and his wife Nidhi (Saloni). The daughter’s name is Prerna (Shikha Talsania) who is a writer by profession but is looking for the love of her life. Now when this whole family comes together under one roof for the potluck, then there is so much ruckus, how many times there is a ruckus….all this has been shown in eight episodes. And yes, how the whole family reacts to the heart attack story of Senior Shastri, will also be clear only after watching eight episodes.

Who has said that a big budget is necessary to deliver great content? Who says that the film can be enjoyed only on the big screen. Those who think like this, take out 192 minutes of their life and watch Potluck. Yes, most of the dialogues of this story are in English… Jokes and things are also of ‘elite class’. But will still connect. Each episode is only 24 minutes long, so the story will not be stretched to you at any time. Anyway, every episode comes with a different angle, so the suspense element remains till the end.

The starcast of Potluck has also been as tremendous as the story. All have looked splendid in their roles. Seeing Cyrus again after a long time will make you all happy. Actors are excellent, the ease with which they get into their roles is commendable. He has left his impact in every episode, every scene. Ira Dubey will also be said to be the best in the role of his wife. Haven’t done any acting, just played the role. Harman Sinha is also a perfect fit for the role of Dhruv. Not only has he done a great job on the physique, but the acting has also been praiseworthy. Saloni, who became Dhruv’s wife, has also played the role of a high-class typical working woman. From showing tantrums to making her husband dance at the behest, her character will be called funny.

Now let’s talk about Shikha Talsania, who did amazing work in Veere Di Wedding. He has a natural wittiness which is easily visible on the screen as well. Give them fewer dialogues too, but they will leave an impact forever. In the series too, he has created a ruckus with simplicity. Although all of them are in the role of co-stars in the series, the real heroes are Jatin Syal and Kiku Gidwani. Meaning, even if you forget the rest of the actors for once, then on their own alone these two actors will take the entire series till the end. Would love to taunt each other, laugh at the way they taunted each other, and then secretly romance will remind many of their old days.

Potluck‘s strength is also hidden in his direction. The way this story has been carried forward, in as many layers as it has been decorated. It’s fun to see that. Meaning there is laughter in every scene….every scene has a commonly spoken style. Not a single time comes when the story has left us. After the end of the episode, the next episode starts automatically and you just keep watching. All this happens because Rajshree Ojha has shown such a wonderful direction. The good thing is that this series has made us understand the meaning of family in a short time, which may not be able to do big films in many hours. No speech has been made, but still, the message has reached us.

So this series is only on Sony Liv. Sit down once and watch the entire series. It will be more fun if you watch it with your family. If you watch alone, watching the series can remind you of the family on many occasions.