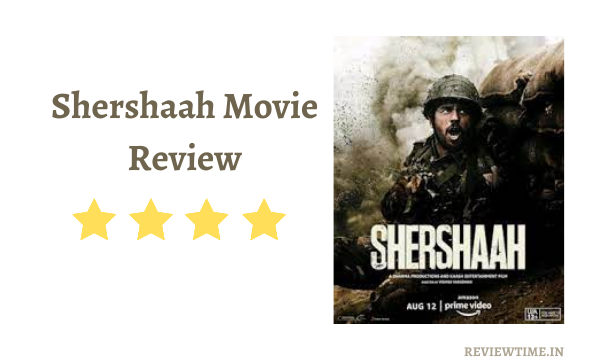 We all know that ‘Shershaah‘ is the story of Captain Vikram Batra, who was martyred in the Kargil War. From his martyrdom, we have become familiar with more or less all the anecdotes of his life in the last two decades. So what does this film give new? Does it follow a cliche pattern like all patriotic films? Or see some change? Let’s talk.

On the front of the story, ‘Shershaah‘ collects all the numbers with the fact that it is not actually a story. This is the real story of a young soldier who set the highest example of valor at the age of 25. Obviously, this story had to be amazing. ‘ Shershaah ‘ covers the journey of Captain Vikram Batra from being recruited as a lieutenant in the army to being martyred in the Kargil War. At the same time, giving space to his personal life also goes on. Apart from the war scenes, what we see on screen is his bonding with his family, the film kind of love with his girlfriend, and friendship with his fellow soldiers. Although there is no new element, presenting the story satisfactorily to the children of the country is no less achievement. ‘ Shershaah‘ is quite successful in doing this.

On the plus side of the film, write this thing immediately that this film is not over the top despite having a scope. And this is the biggest relief. Otherwise, the Hindi film industry has considered ‘unnecessary chest thumping’ essential in such films. This is not a factor here and it makes the film look beautiful. Even if such dialogues come in a couple of places, the tone of the actors balances out that unnecessary aggression. And because of this, what is being said seems to be effective. Doesn’t look fake or filmy. This is the biggest plus point of ‘ Shershaah‘.

Some of the dialogues in the film are very good. Some are such that they seem even and intelligent too.

The scenes of mutual bonding of soldiers have also been made well. Their connection with each other is felt and feels good.

Another good thing about the film is that it avoids the misuse of a tool called ‘Cinematic Liberty’. Our cinema industry has made terrible blunders in the past with the help of this one tool. Such things have been shown which had no relation to the real story at all. ‘ Shershaah‘ saves herself from this infatuation. The film revolves around the available facts of the life of Captain Vikram Batra. A special thanks to the makers for this intelligent work.

Usually, the ‘love track’ in such films looks awfully miss-placed. Sometimes it also proves to be a hindrance to the speed of the film. This is not the case in ‘ Shershaah‘. The love story of Captain Vikram Batra is an important part of his life. This helps us a little in understanding the life after taking off a soldier’s uniform. This track gives us a glimpse into the personal life of Captain Vikram Batra. And the sentimental does. Vikram’s telling Dimple that they will spend not four but forty years together haunts in the light of the fact that this could not have happened in reality. Their last meeting at the bus stop is also an uncomfortable scene for the audience. Everyone knows that this man will not return now. Except for Dimple.

‘ Shershaah‘ is a real-life tragedy. Obviously, there were bound to be many emotional moments in this. Whether it is the last meeting of Vikram-Dimple, the martyrdom scene of Vikram, or the funeral scenes with his state honors. There is enough space to get emotional. But my favorite scene is someone else. At that moment, I felt something stuck in my throat. Vikram Batra has got success in his first mission. He and his team have saved a point from Pakistan. Vikram Batra has been promoted and after that a journalist interviews him. The people of Vikram’s house are also watching this interview. Everyone is gathered. Seeing Vikram on TV, his mother speaks in a timid voice,

“Look how he has grown a beard.”

Pure emotion. The sun-shade of emotions is reflected in such a scene. Not with artificial dialogues written by putting extra effort.

This film is the biggest film of Siddharth Malhotra’s career. He has taken this role. Whether it is the brave soldier Vikram Batra fighting with the enemies in uniform, or the film lover Vikram Batra who demands Dimple by cutting his finger, he has done it all in a convincing manner. Kiara Advani also looks perfect in the role of Dimple. Whether speaking in Punjabi accents or standing in front of her father, she shines everywhere. All the other actors in the movie are also good. Shiv Pandit shines in the role of Lieutenant Sanjeev Jamwal. The same can be said about Nikitin Dheer, Abhiroy Singh, Anil Charanjit, and Sahil Vaid. Shataf Figar, who plays Lt Col YK Joshi, will have to be given special mention. He is a solid military colonel.

The cinematography of the film is good. Kamaljit Negi has done a good job. The battle scenes have become good. Director Vishnu Vardhan has been doing good work in Tamil cinema. This is his debut in Hindi. He has been able to do justice to a great extent with a super-popular story. Will be hoping for better from them.

One more thing worth mentioning. At the end of the film, original photos of all the characters are shown. Except for Dimple. Their privacy has been taken care of. This seems like a wise decision of the makers. Special thanks to him for this.