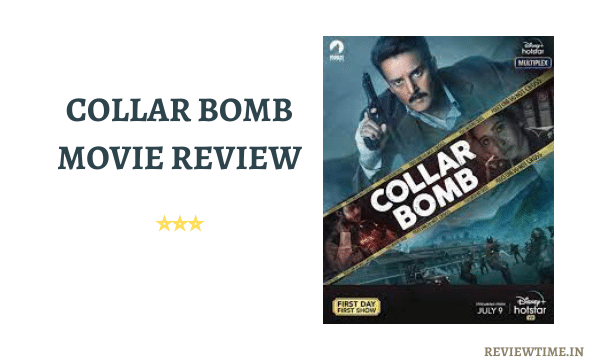 It is wrong to judge anyone by their caste, religion, and appearance. Director Dnyanesh Zoting has come up with the thriller ‘Collar Bomb‘, which highlights the serious consequences that a wrong decision of a human being can give. After garnering fame by writing and directing three short films, “Collar Bomb” is Gyanesh’s first feature film as a director which is being streamed on Disney+HotStar.

Manoj Kumar Hessey (Jimmy Shergill), a police officer from Sanawar near Shimla, wants to send his 12-year-old son Akshay (Naman Jain) to another place to study. After that, he goes to ‘St George’s School’ in Sanawar with his son Akshay, where he solved the disappearance and murder of a school girl Neha, and today there is a condolence meeting on Neha’s death in the school.

Just then, suicide bomber Shoaib Ali (Sparsh Srivastava) arrives with a gun in his hand, hanging explosives around his neck. And takes all the children to present there hostage. He declares that every parent will have to sacrifice one or the other to save the life of their child.

After some time, he tells Manoj Hessey that he can find three correct answers within an hour and save all the children alive by correcting the three buttons hanging around its neck. It is revealed that Shoaib is working for a woman named Rita. At the behest of Rita, he is getting Manoj Hesey to complete some tasks.

On the other hand, this news spreads like fire. When ASI Sumitra, investigating in her own way, reaches Barkat Ali’s dhaba, it is learned that Shoaib has been working at Barkat Ali’s dhaba for some time and the public burns that dhaba as a terrorist shelter. ASI Sumitra (Asha Negi) rescues the elderly Barkat Ali, who runs the dhaba and exposes the leader who instigated the mob. Here comes the truth of Manoj Hessey’s past, due to which all this is happening. Sumitra starts seeing all the mistakes in Manoj Hessey. People understand that a mistake made in the past is being avenged by Manoj Hessey. What happened next? and how all the students are rescued? to know this, you have to watch the movie.

The biggest weak link of the film ‘Collar Bomb‘ is its story and screenplay. The message of the film is excellent and some of the thrilling scenes are well crafted, but the whole story and script ruin the film. The suicide bomber stipulates that one of the parents of each child must be sacrificed, but within minutes the story ends with police officer Manoj. The climax and ending of the film do not excite me. The murders taking place in the middle of the story and the personal life of some people, the story of a boy named Matthew does not understand why all this is happening? Is it the first condition of the attacker or the issue of Matthew’s life is just something unnecessary Seems like. Sometimes it seems that it is a terrorist attack and sometimes it looks like a Hindu-Muslim color.

Jimmy Shergill has given a brilliant performance in the entire film. His millions of fans also like him in police or military uniform. Naman Jain’s acting is also fine. His facial expressions say a lot. Rajshree Deshpande is active late in the film but leaves a mark on her acting. Asha Negi’s character is quite tall in the character of Sumitra, and she is able to do justice to her character. Sparsh Srivastava disappoints. His face appears flat everywhere, while he had plenty of opportunities to show his acting talent.

FOR THE LATEST MOVIES AND WEB SERIES REVIEWS, VISIT REVIEWTIME.IN