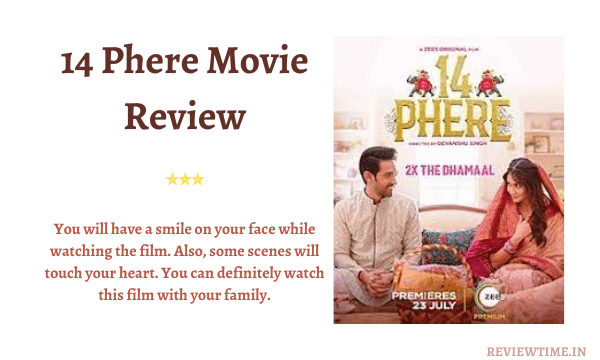 The film ‘14 Phere‘, released on ZEE5, showcases the love story of Sanjay Lal Singh (Vikrant Massey) and Aditi Karwasara (Kriti Kharbanda). The love story of both starts with college ragging and ends in live-in. While Sanjay is from Bihar, while Kriti is from Rajasthan, both the families are totally against love marriage. By the way, you must have seen this much in many films… But like other films, Sanjay and Aditi neither run away nor do they get involved in persuading the family members. They do tricks and do wedding planning. Sanjay creates a fake family for Aditi’s family and Aditi creates a fake family for Sanjay’s family members. Now whether marriage is possible or not and what are the problems, you will know this only after watching the film.

Devanshu Singh has directed the film. Seeing the direction of the film, you will not feel anything too out-of-the-box or too spectacular, although at the same time you will not say that something is faded. According to the script, Devanshu’s work is also good. On the other hand, if we talk about the actors, then Vikrant Massey is a fine artist and once again he has shown his acting skills. Kriti, on the other hand, is a little pale in front of Vikrant, but you will not feel like this again and again. Apart from Vikrant and Kriti, Gauahar Khan had to show most of the overacting in her character Zubina, so she has shown that. Apart from this, Jameel Khan has also been seen doing justice to the character. Yamini Das, playing the character of Sanjay’s real mother Sara Lal Singh, is less visible but looks very cute.

One of the best things about the film is that there is a song for almost every scene. Twice marriages, different songs for her, different songs for wedding preparations, and even when Sanjay and Aditi have a fight, you still get music. At the same time, these songs are not so loud that the scene gets suppressed and not so slow that you get cooked. Apart from this, the character of Vikrant has been written so cute that you will fall in love with him. Sanjay is not only a good boyfriend but also a good son and brother. Not wanting to go abroad because the mother will be left alone… There are other aspects too. Apart from all this, the film also touches on the issue of an honor killing at the end.

In the film, the journey of Aditi and Sanjay’s college life and live-in is shown to you in the first ten minutes itself, which as a viewer you wish to see a little more. At the same time, the script of the film also seems to give up on some parts, where you tell yourself that this could have been done, that could have been done.

You will have a smile on your face while watching the film for about 2 hours. At the same time, some scenes will touch your heart too. One of the best things about the film is that no attempt has been made to forcefully keep it long. In such a situation, you can definitely watch this film with your family.