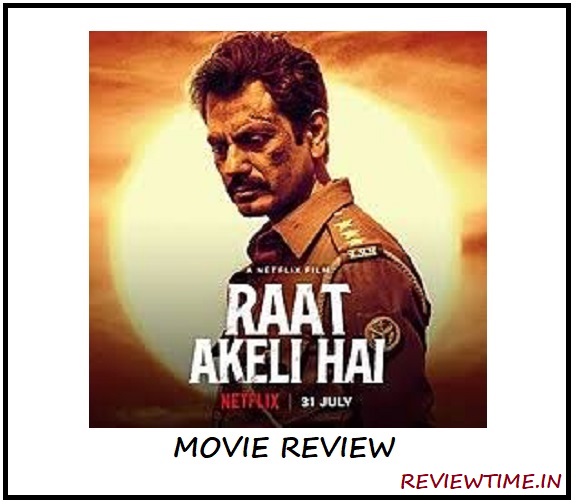 The head of a family who marries a girl younger than his age, and on the same night, three people, including the headman, are killed within minutes. It takes entry to solve the murder mystery, Nawaz remains a policeman. At first, Shakha goes to Radhika Apte, who is the bride of the chief, but later one episode after another opens, and the truth that comes out is really shocking.

Due to the epidemic spread across the country, the film has been released on Direct Netflix. This film also serves you with a spicy story with excellent acting.

The film Raat Akeli Hai is the story of solving a murder. This kind of murder mystery looks good when the audience enjoys the journey to reach the killer. The fun is doubled when the questions arising in the mind and reasonable answers are given as to why the murder was done.

A journey to reach the killer is emphatic in Raat Akeli Hai. The three-fourths of the film thrill due to the good acting and tight direction, but the fun is not doubled because Raj is shown too much haste to open.

The aged Thakur Raghubir Singh is killed on the night of his second wedding. The case is assigned to Police Inspector Jatil Yadav (Nawazuddin Siddiqui).

Jatil believes that there is someone at home who has killed Raghubir Singh. Raghubir Singh was an influential man. He has a family relationship with MLA Munna Raja.

When Jatil tries to get into the bottom of the case, he is intimidated. SSP Lalji Shukla also pressurizes him.

How does Jatil deal with this situation? Does he reach the killer? After all, why is Raghubir murdered? Answers to these questions are found at the end of the film.

The story written by Smita Singh has many twists and turns. The plot is seen at every step. There are many characters that can be doubted because some have reasons that they can kill Raghubir. So the film catches on the audience right from the beginning.

Director Honey Trehan also has a great way of presenting the story. This is a thriller film, so they do not rush it fast but rather speak theirs heartily. But when to keep this pace high and when it is less, they have gone a little wrong.

More than half the film runs at a balanced pace. Then the stagnation becomes more. Finally, when the secret is exposed, the speed becomes so high that it becomes difficult to keep pace.

The ending of the film does not live up to the expectation that three-fourths of the film has created an atmosphere. It leaves some questions. One drawback of the film also is that most of the newcomers are there, so it becomes a little difficult to remember who is what.

But despite these shortcomings, the film binds most of the time. The reason for this is good acting, skillful direction, great cinematography, and great artwork.

The film is set in Kanpur and the style of North India is beautifully threaded in the film. The old mansion, the artwork with furniture, adds depth to the film.

Pankaj Kumar’s camerawork is excellent. Lights are the best use and give the film a different look. Some scenes are shot in a great way.

Nawazuddin Siddiqui’s acting is amazing. He is fully immersed in the character of Jatil Yadav and he appeared in full form. He has played the role of a stubborn inspector in ‘Kadak’ style.

Radhika Apte definitely faded. She did not reach the level of the best actress. All the supporting cast including Aditya Srivastava, Sridhar Dhubey, Shivani Raghuvanshi Tigmanshu Dhulia, Ila Arun, Riya Shukla are excellent.

Ila plays the role of Nawazuddin’s mother and the mother-son nostalgia entertains well. The length of the film could be reduced a bit.

Overall Raat Akeli Hai is not a great film, but it has elements that make it worth watching.