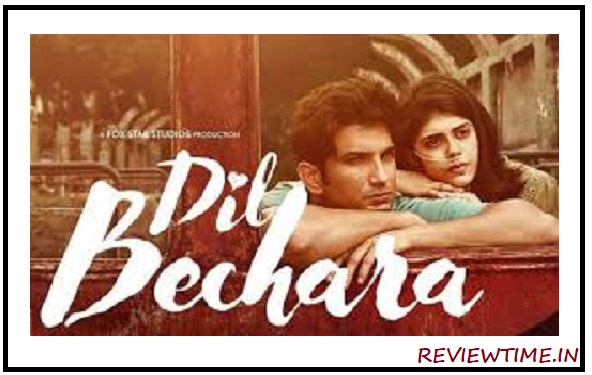 Dil Bechara is an upcoming Bollywood drama of the year 2020, directed by Mukesh Chhabra. Sushant Singh Rajput and Sanjana Sanghi will be seen in lead roles in the film, casting director Mukesh Chhabra will make his directorial debut. Sanjana is going to debut in Hindi cinema with this film. Let me tell you, this film is a Hindi remake of the American romantic drama ‘The Fault in Our Stars’.

According to reports, Mukesh Chhabra has finished shooting for the film, which will be released on July 24, 2020, on the digital platform, Disney Plus Hotstar.

The film is a Hindi remake of the Hollywood film The Fault in Our Stars.
The name of the film was Keiji and Maini but it was later changed to Dil Bechara.

The film was scheduled to release on May 8, but due to the epidemic, its release date has increased, and will now be released on the digital platform, Hotstar.

Let me tell you that … This film is the last film of Sushant Singh Rajput. The shooting of this film has been completed, before this film was released, Sushant left this world saying goodbye forever.

It is not possible for anyone to not get emotional after watching the film. In the film, Manny (Sushant Singh Rajput) smiles on the lips and lives in the eyes – ‘when to be born and when to die, we cannot disguise it .. but how to live we can disguise it‘… On hearing this, the memory of June 14 comes to mind, when this star said goodbye to the world forever. Let me tell you, it is not easy to review except emotionality. But it would not be wrong to say that Sushant is the life of the film.

Dil Bechara is the official remake of John Green’s book The Fault in Our Stars. A Hollywood film has also been made on it. So, when Mukesh Chhabra announced the film, it had raised a lot of expectations from it. In Bollywood, before this, films like Anand, Ankhiyo Ke Jharokhon, Kal Ho Na Ho have been made, which grapples with similar feelings.

There are very few characters in the story, where the hero and heroine are Kizie Basu (Sanjana Sanghi) and Immanuel Rajkumar Jr. aka Manny. Both are completely apart from each other and they meet during the college fest. Kizie suffers from thyroid cancer. She is strong but likes to be limited in herself, she knows that her life is different from others.

On the other hand, Rajinikanth Fan Manny is a vivacious and junky boy. The two meet constantly, and during this time, Kizie learns that Manny has been a cancer supervisor. Both fall in love only after a few meetings. But this love is not a life-giving love for each other, but a strong link to each other and is going to live life together. Both have some dreams, which they fulfill for each other. Manny brings love into Kizie’s life, teaching him how to live life freely. Which is probably like a lesson for every human being.

The strong side of Mukesh Chhabra’s film is its casting. Sushant Singh Rajput in the role of Mastamoula and Jindadil Manny is very well received, while Sanjana Sanghi is standing firmly in front of him. The chemistry of both is shown well in the film. Swastika Mukherjee and Shashwat Chatterjee play the role of Kizie’s mother-father. Both are true to their character. The film depicts the Bengali family, in terms of which the director has done the exact casting. At the same time, Sahil Vaid has done justice in the role of Manny’s friend. Mukesh Chhabra has presented a different style of Sushant to the people in the film, where he has been seen playing all kinds of emotions, comedy, romance, emotional. Not only Sushant’s last film but also Sushant’s best performance, the audience will always remember this film.

John Green’s book The Fault in Our Stars has been adapted into a script keeping in mind the likes of Indian audiences by Shashank Khaitan and Supratim Sengupta. However, in the process of making a film from a book, the story loses its charm. There is no depth and emotional attraction in the story. Swinging between weak screenplays, the film is saved by AR Rahman’s music and excellent star cast. This is Mukesh Chhabra’s first film as a director. He has given all the screenplay characters a good chance on screen. In the midst of a weak screenplay, he has woven some memorable moments between Kizie-Manny and the family. Satyajit Pandey’s cinematography is excellent. The lead characters are best shown amidst the beauty of Jamshedpur and Paris.

The music of the film is composed by AR Rahman, who connects directly to the heart. Amitabh Bhattacharya is the lyricist. There is a special thing in Rahman’s music that it slowly rises like a hangover, the songs of this film will also keep going in your mind for a long time. The title track of the film, ‘Dil Bechara‘, brings a lot of fun to the comedians and stars. The film album has a total of 8 songs.

To see or not to see:

There is probably no question of not watching the film. There are very few moments in life when you all want to forget something and get carried away. Watching ‘Dil Bechara’ is the same. It is like a memorial for Sushant Singh Rajput. Like Manny, you want to keep Sushant alive. ‘Dil Bechara‘ should be seen for the film’s best star cast.

Manny of ‘Dil Bechara‘ sounds a bit like Sushant Singh Rajput. Her heart-winning laughter, sharp mind, smart, and extremely emotional. While watching the film, the eyes are wet, but as Manny has said – ‘when to be born and when to die, we cannot disguise it .. but how to live we can disguise it ..’ Will always give good memories to their loved ones.