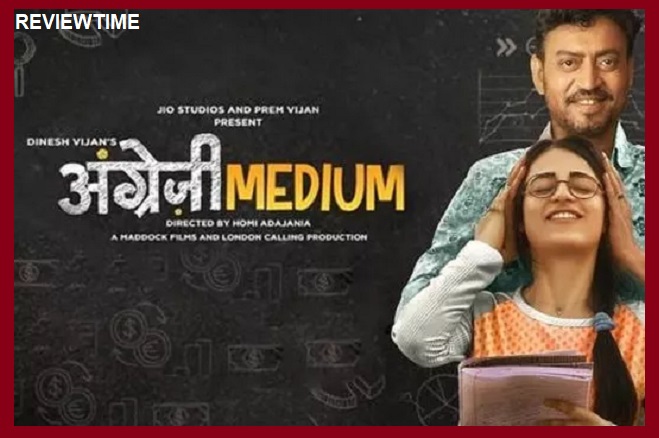 Angrezi Medium Movie is a Bollywood drama directed by Homi Adajania. The film stars actor Irrfan Khan in the lead role. Angrezi Medium is a sequel to Hindi Medium.

The film portrays many shades of children’s changing relationship with their mother-father through emotion and comedy.

The wife of Champak Bansal (Irrfan), owner of Udaipur’s famous sweets shop ‘Ghasitaram’, dies shortly after the wedding. After which her entire routine revolves around her daughter Tarika (Radhika Madan). At the same time, he continues to murmur with his brother Gopi (Deepak Dobriyal) about the sweets shop. Everyone’s life is generally cut off in Udaipur. But Tarika wants to study abroad. She does not want to keep her dreams tied up and says to the father- “I cannot live as a frog of a well, I have to see the world”. Father also makes his daughter’s dream apart and encourages her. But the matter comes to a halt at a huge fee. But as stated at the beginning of the film- “Father is a fool who is willing to sacrifice everything in child love” .. Champak Bansal also makes every effort to teach his daughter at the University of London. During which their relationship goes through many ups and downs and new emotions.

In the film, Irrfan plays the role of Champak Bansal, who is a single father and raises his daughter. Tarika (Radhika Madan) is an average student who has a lovely bonding with her father. She has big dreams of traveling around the world. Champak soon learns that no matter how hard he tries, his daughter’s aspirations cannot be suppressed. Eventually, he has to agree with the daughter. But there comes a problem. He inadvertently does such a thing that the scholarship of a daughter in a university in London comes under threat. So, now if Tarika wants to study in the UK of her choice in the UK, it will be a financial burden on the family as a whole.

Director Homi Adajania has a huge task of keeping us with the film for about 145 minutes, but he can do this work only sporadically. There are many stages in this – sometimes in a box where the family can be seen fighting a case. Sometimes a travel agent is circling, who takes illegal methods abroad. Champak and his younger brother befriend a woman in an attempt to escape from the London police officer. And this is as disappointing as waiting for an ad to finish before watching a video on YouTube. In all this, the real story is hidden somewhere.

There are a lot of interesting aspects of the film that were started and eventually abandoned. One such example is the daughter’s passion to go abroad. It is not much about academic excellence, but an attraction towards foreign culture and lifestyle.

The Angrezi medium has some very strong performances. Although they all appear mostly as extended cameos. Dimple Kapadia is an aging woman with a temperamental nature, Kareena Kapoor in the role of an always angry police officer. And Ranveer Shorey plays Bablu, a childhood friend. Despite getting less screen time, Pankaj Tripathi has played the character of a Dubai travel agent well.

For the most part, the ‘Angrezi Medium‘ is of Irfan and Deepak Dobriyal. The comic timing they narrate is fantastic. His scenes together and especially his scenes with Kiku Sharda. However, it does not contribute much in taking the story forward. Radhika Madan is good in her character, but she stuck dialogue delivery kicks in a bit.

When the camera rests on Irfan, everything starts coming together. Here he is an actor who smoothly plays his comedy style with an attractive performance in the role of a father so effortlessly. In a way, the entire film is Irrfan’s show, but due to its scattered story, the film has to suffer.