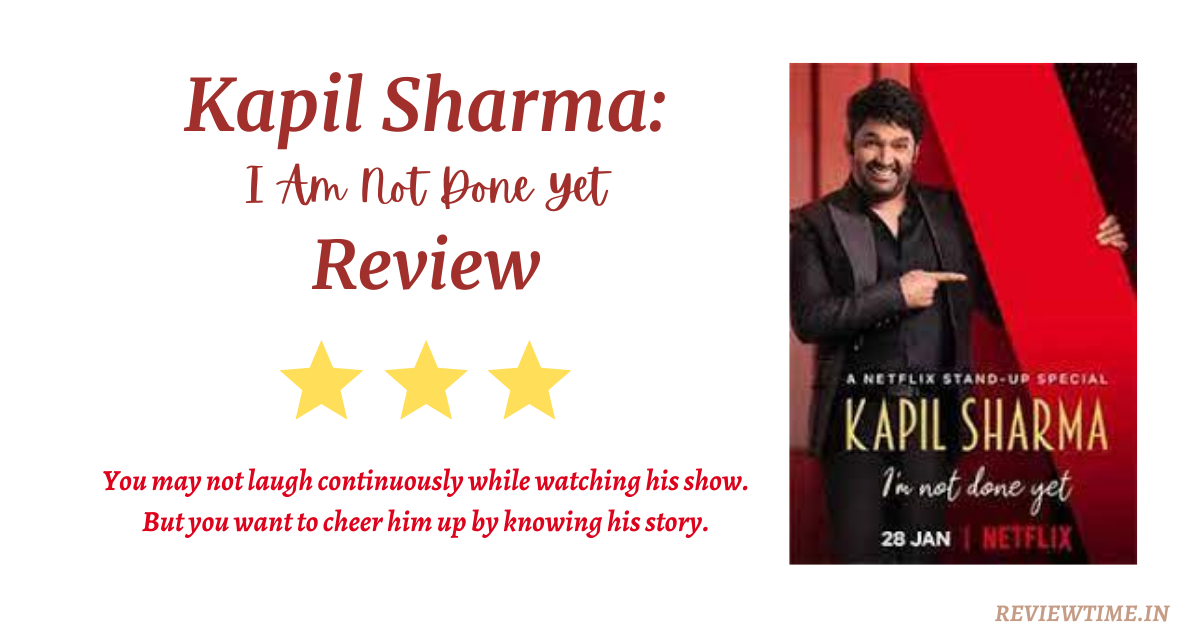 Kapil Sharma: I Am Not Done Yet Release Date:

I Am Not Done Yet Trailer:

Kapil Sharma: I Am Not Done Yet Review

Kapil Sharma‘s stand-up special I Am Not Done Yet is not a regular stand-up show. This is a slightly personal and intimate version of The Kapil Sharma Show, which has been prepared for the audience with the OTT platform.

As we said Kapil talks in this show. He is telling his journey from where he started his career. How much did you struggle? Came to Mumbai and returned empty-handed. Come back to Mumbai to win the laughter shows. Then suddenly a phase comes that he reaches Shahrukh Khan’s bungalow uninvited in the party. Shahrukh dances with her for hours. Take pictures of them with your staff. Kapil Sharma is telling his story in this show. That’s why it is wrong to call it a standup comedy special. This is a celebration of the journey of a star named Kapil Sharma. And Kapil makes it fun with his kind of storytelling.

Kapil Sharma is not in the game of love, setup, punchlines. He does his own kind of comedy. Which is considered to be an improvisational comedy. His specialty is being spontaneous. That is, he is known for making jokes about anything happening in front of him. When you see him performing in his stand-up special, many things will seem planned and rehearsed. Instead of working hard on writing, Kapil Sharma’s star power and his comic style have been shown more.

In this special, Kapil talks about only those issues, about which the public wants to hear. His drunk tweets to the Prime Minister of the country, his love story, his struggle story, and finally his success story.

I Am Not Done Yet can be a different experience for Kapil Sharma. Because he is performing for a different kind of audience. But this thing does not appear in their content. However, if you remove the stand-up tag from this special, then it is a watchable episode. You don’t get bored. You get to hear the real story of Kapil Sharma’s level comedian from his own mouth. He talks openly, leaving the fear of TV. He narrates the story of the most difficult phase of his life. Warns people against depression. Tell the world about your father. Basically, they establish an emotional connection with the public. You may not laugh continuously while watching his show. But you want to cheer them up by knowing their story.

Kapil Sharma: I Am Not Done Yet Rating:

Kapil Sharma: I Am Not Done Yet Review
Spread the love