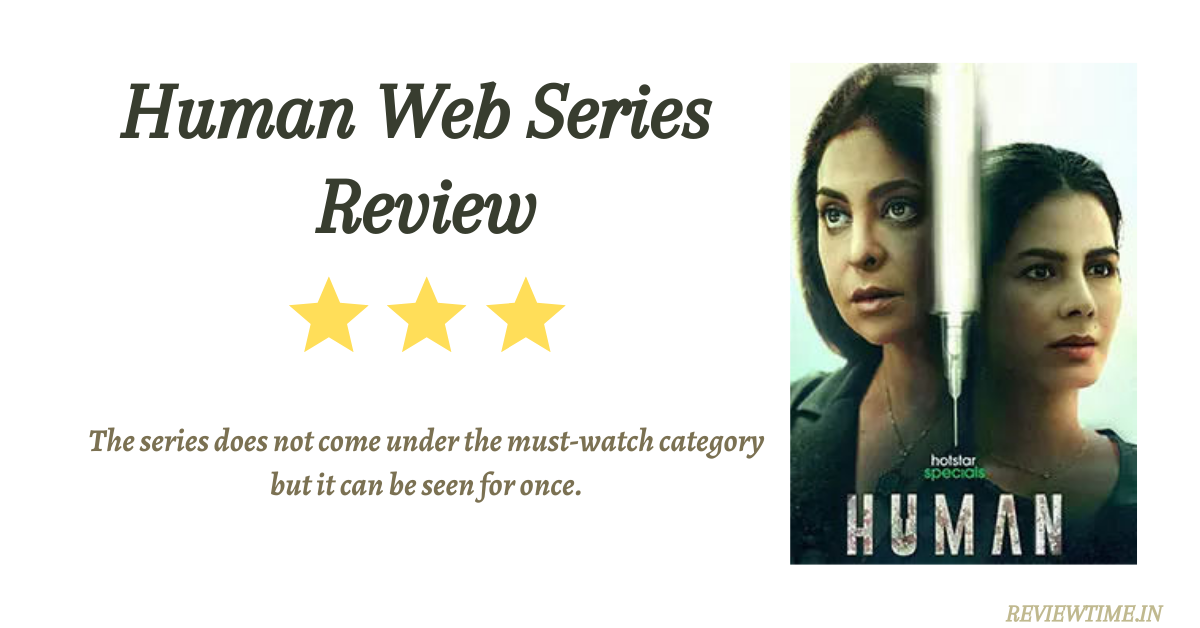 A show has been released on Disney Plus Hotstar, ‘Human‘. Which has been created by Vipul Amrutlal Shah and Mozez Singh. Actors like Shefali Shah, Kirti Kulhari, Seema Biswas, Ram Kapoor, Aditya Srivastava, and Vishal Jethwa are part of the cast of the show. ‘Human‘ was being touted as a medical thriller show. How much it is able to tap into the dark side of the noblest profession, now we will talk about it.

There are many players in this story whose story comes at some point and meet each other. The main plot of the show focuses on drug trials of pharma companies, how some companies do not consider human life as anything for their own benefit. Ayush Pharma is busy getting a drug trial passed. He believes that this new drug will help heart patients. But on those on whom this test was done, many of them started getting seriously ill, while some even died. The pharma company wants to keep this information away from the world. The next player is Dr. Saira Sabharwal, whose role is played by Kirti Kulhari. Saira has joined Manthan Hospital. She doesn’t get along with her family, so she stays away from them. Career-wise is successful, but till now not been able to turn on her sexual preference.

Saira has been hired by Gauri Nath, head doctor of Manthan Hospital, in which Shefali Shah is in the role. At first glance, Gauri seems to be such a doctor who would be sad to see the suffering of others, idealistic type. But there is no white in this gray world. As soon as you get to know Gauri, you start getting scared of her, her words seem less threatening. Gauri also has a dark past, whose roots are associated with a strange person named Roma.

Kirti delivers in the role of Saira, does not look over the top. Shefali Shah shines the most in the cast. After this series, there is a desire to see him in well-written negative characters. Whatever scene she is in, she makes her strong screen presence felt. It is just the weak writing of the show which cannot do justice to them. Similar is the case with Vishal Jethwa as well. Vishal played the role of a boy named Mangu, who lives in the slum area. In order to pay off his debt, Mangu gets his parents drug tested. After which the gilt of the mother’s deteriorating health starts eating her. Coming to this point, there are some scenes where you want to keep seeing Vishal in his element. Whether it is crying helplessly, or apologizing by falling at the feet of your younger sister.

The show tries to deliver a medical thriller to its audience. The research was done here regarding medical terminology, there is no air in the name of drugs. Starts off on the right note, but gets entangled in its sub-plots, after which it forgets what to say. There is another major complaint with the writing of the rest of the show. Here the dialogues between the characters do not look natural, rather it seems that they are just narrating their own story, which seems boring.

Apart from the writing, there are also flaws in the editing of the show. There is a similarity between cinema editing and real-life detectives, the presence of both comes to the fore only when there is a mistake. In many scenes, the shots are cut in such a way that it knocks, it is clearly visible that there is a jump cut here. The cut where the continuity of the scene is breaking.

‘Human‘, released on Disney Plus Hotstar, is such a show that some parts leave their impact, but when these parts are combined after finishing the show of 10 episodes, then that addition turns out to be much less than the entire show. After watching this series, I have mixed thoughts in my mind, neither it can be dismissed outright, nor can it be kept in the category of must-watch.