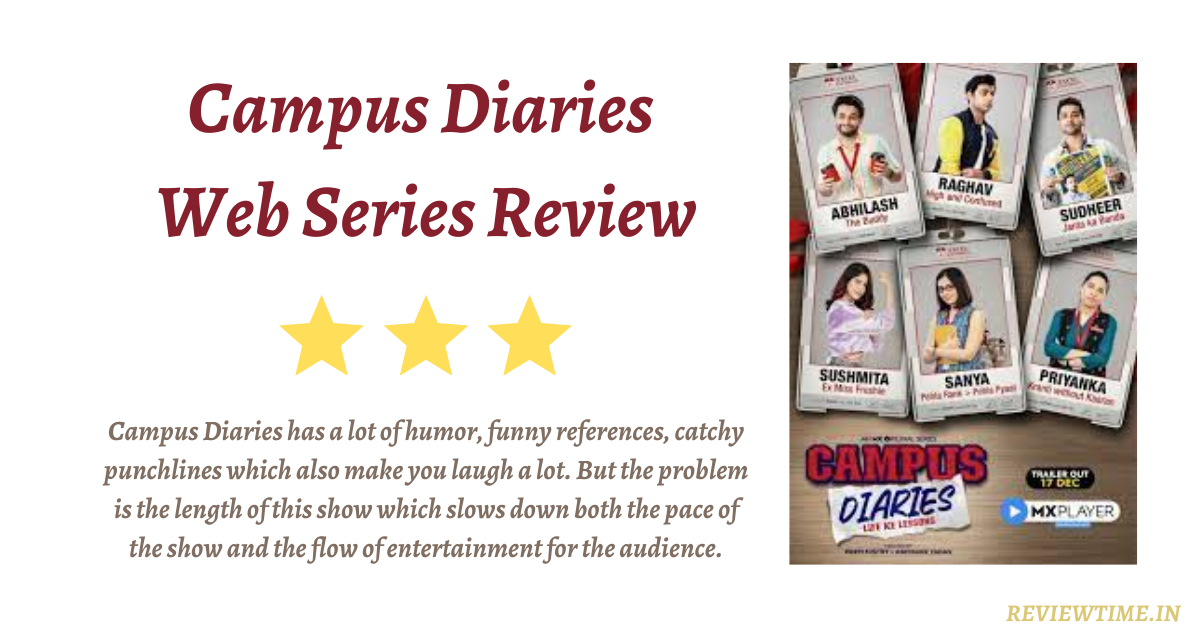 On the New Friday of the New Year, a new series called ‘Campus Diaries‘ has come on the new-looking MX Player. This is a teen comedy series that is directly youth-oriented.

The center point of the story is Excel University. Where the walls are extra bright and students extra loud. By the way, many students study here. But the poor people all live in the background. The main characters of the story are only six.

Just the entire series revolves around their equation of physics to the chemistry of relationship, civics of student politics, history of old trauma, and lots of craziness in the canteen.

First of all, we will talk about the biggest minus point of this series. The biggest minus point of this show is its length. There is a total of 12 episodes in the show. Some of which are between 30 to 35 minutes and some between 40 and 55 minutes. Due to which the rhythm of the show does not remain intact. Especially the middle episodes get stuck. Where it seems the story is being dragged just like chewing gum.

Well, the second minus point of this series is the lack of freshness. This series has come after many shows like ‘Kota Factory’, ‘Hostel Days’, ‘College Romance’, ‘Mis-matched’. That is, whatever hostel life, college life, teenage romance is seen in ‘Campus Diaries‘, they all seem to be seen in these shows. Nothing new was felt.

There is also a complaint regarding the casting of the show. The main actors in the show perform well. Which we will talk about later. But apart from these, the other cast fades completely. In many places, due to supporting actors, you will see in the show even though good scenes are being beaten up badly.

The strong side of the show is its writing. Due to which we do not know why from the very beginning we were smelling the tadka of ‘TVF’. But the show was not on TVF. Later, when I read the name of its creator and writer, I understood why it was so. Prem Mistry and Abhishek Yadav have written ‘Campus Diaries‘. Prem has directed this show. And both of them have been the head chefs behind TVF kitchen shows like ‘Kota Factory’, ‘Permanent Roommates’. In this show too, Abhishek and Prem have brought everything from the gossip in the college canteen to the equations of one-sided, two-way, four-way love with fine details.

References coming in writing look funny. You’ll find plenty of pop culture references in the series from ‘Game of Thrones’ to ‘Breaking Bad’. In these dialogues, the abuses have also been fitted with a sense of bulk. Which seems natural in many places. But in many places, it seems very forced. As if the color in the bucket of humor ran out, then the balloon of abuse was hit. The show would have been more fun if these ‘extra’ abuses had been avoided. The show’s cinematographer Jerin Paul is also praised here. Who has presented the college campus very beautifully?

The most popular face of the cast of this show is Harsh Beniwal. Harsh is a well-known YouTuber. Mostly makes comedy gags on his YouTube channel. Here too he has mostly done comedy with his channel. With a very ‘cliche’ Haryanvi accent. But seeing his performance in some emotional scenes, his acting graph seems to be rising. Saloni Khanna impresses in the role of a very flamboyant Sushmita. Those scenes of her, where she takes off her college head with utter impudence, look funny. In the matter of impressing, Srishti Rindani, playing the role of Sanya, impressed a quarter of a village more than Saloni. The role of a small town nerd-type girl has been closely captured by Srishti. Sanya’s character goes through many ups and downs. Srishti manages this up-down with her acting skills like a see-saw.

Ritwik Sahor was comfortable in the role of Abhilash. However, Abhilash’s character would have been a routine job for him. He has been playing the character of such a college student for many years. Saloni Gaur also does her job well in the role of Priyanka, a conscious revolutionary. A special mention is made here of Abhinav Sharma, who plays Raghav Gupta. Abhinav has caught a lot of basic knowledge of a drug addict stoner. His eyes, voice will make you doubt whether he is really drunk.

Campus Diaries has a lot of humor, funny references, catchy punchlines which also makes you laugh a lot. But the problem is the length of this show. Because of which the humor does not come back to back. In between, some scenes are very unnecessary which slows down both the pace of the show and the flow of entertainment for the audience. Due to which the show falls in the ‘fine’ category that falls between good and bad. This is our opinion, the rest is your decision.