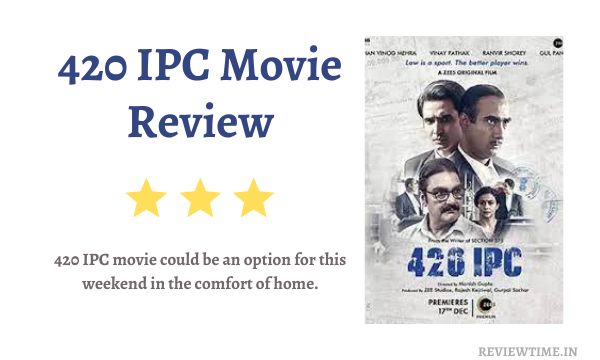 OTT platforms also have all the legal dramas in the form of web series and films. In such a situation, another courtroom drama has come on ZEE5 – 420 IPC.

The best thing about 420 IPC is that there is no exaggeration or redundancy anywhere in the court or court proceedings that are seen here. The film proceeds with simplicity in a head and tail style of legal entanglements and slowly engages the viewer with its narrative. What appears to be a simple case becomes huge by the time the climax approaches and the film ends on a logical end.

Bhosale has been accused of embezzlement of Rs 1,200 crore from a bridge construction project in Mumbai’s Airoli area at a cost of Rs 3000 crore. CBI arrests him. In the course of the investigation, CBI also interrogates Bansi Keswani. Searches the house. But when she doesn’t find anything, she lets him go. Two months after this incident, Bansi gets into new trouble.

Bansi is accused by one of his clients, Neeraj Sinha, of stealing three checks of Rs 50 lakh each. Neeraj is a big builder of Mumbai and Bansi used to handle his accounts and was a man of trust. The police investigation begins. The three checks are found in Bansi’s one-room office, where besides Bansi sits just one assistant. Bansi is sent to judicial custody. The trial begins. Birbal Chaudhary fights Bansi’s case. Birbal is a young lawyer with a sharp mind, who is in search of a name and a position for himself. He does not consider it wrong to do a little manipulation to win the case.

Public Prosecutor Savak Jamsetji is an experienced and sharp lawyer, due to which the judges are also impressed. Jamsetji is also a CBI lawyer in the MMRDA case. The subsequent film is based on the court battles between these two characters and Birbal’s investigation to save his client, which leads to many shocking revelations. The layers of the characters of Bansi Keswani, Pooja Keswani, and Neeraj Sinha unfold. To know the hidden secrets of all these characters, it is better to watch the film yourself.

Usually, courtroom dramas have been made about murder, rape, or fighting against the system, but in 420 IPC, the economic offense is at the center of the court drama. The film comes to the point of an issue as soon as it starts without wasting time. After the CBI interrogation of Bansi Keswani, it seems how the film will proceed, but then the story is taken forward by bringing twists in it through the screenplay, whose strings connect with the incident that happened in the beginning in the climax.

The simplicity of the film’s scenes and the feel of reality impresses. Manish Gupta has written-directed the film. Earlier he had written section 375. On an emotional level, the story of 420 IPC is not as intense and sharp as Section 375, but the performances of the actors and some twists have taken over the film.

All the actors are comfortable in their characters and do their work by staying within the limits of the character. There is no rush to show forced heroism in any character. Vinay Pathak, Ranvir Shorey, Gul Panag, and Arif Zakaria are capable actors and know how to get into characters very well. This is Rohan Vinod Mehra’s second film.

Incidentally, his debut was also from the story of an economic crime, Bazaar. In this film, Rohan felt a bit struggling to settle down as a rising struggling lawyer. Perhaps due to the lack of consistency in the writing regarding his character, he seems to be losing some places.

Due to the time duration of 98 minutes, the film does not feel stretched or incomplete. 420 IPC could be an option for this weekend in the comfort of home.