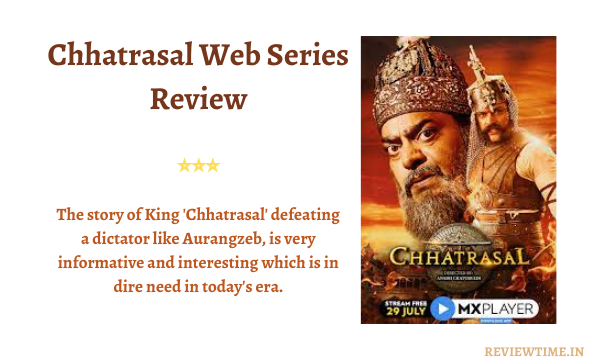 On July 29, a new historical drama series ‘Chhatrasal‘ was released on MX Player. There is a total of 20 episodes in the series. Each episode is between 50 and 55 minutes long. How is the show, what is the story, how is the acting, we will talk about all these topics?

The story dates back to the 17th century. India is ruled by the Mughals. Aurangzeb snatched the throne from Shah Jahan, based on his cruelty and fear, not only the Mughal Sultanate but also captured the whole of India. The kings of most of the states are kneeling before the immense power of Aurangzeb without fighting. At the same time, a son is born to Lal Kunwari, wife of Champat Rai of Bundela princely state in Bundelkhand, away from Delhi. The name of the baby is Chhatrasal.

Taking war skills and knowledge of scriptures from parents, Chhatrasal is growing up that Mughal soldiers attack and kill Champat Rai along with his wife one day. 12-year-old orphan Chhatrasal vows that one day he will avenge the murder of his parents by beheading Aurangzeb. Inspired by the Maratha Chhatrapati Shivaji Maharaj, at the age of just 22, with a detachment of 5 horsemen and 25 soldiers, they take on the mighty army of the Mughals. With time, Aurangzeb’s cruelty and Chhatrasal‘s bravery continue to grow. How Chhatrasal, following the path shown by his guru Prannath Ji, frees Bundelkhand from a ruler like Aurangzeb in the future, is seen in this series.

There have been many such heroes and heroines in the history of India, who did not find a place in the limited syllabus of the history books of our school. Therefore, a large part of the public psyche remained unaware of their bravery. And only a handful of historians got a chance to read these heroic stories. Through cinema too, the story of those rulers came on the screen, about whom the public knew a little bit beforehand but was aware. Because bringing the story of an ‘Unsung Warrior’ on the screen of cinema is a big financial risk in itself. For this reason, most of the makers play safe by making films with the ‘crime + comedy + action’ formula giving financial security related to the current trend.

In such a situation, thanks to director Anadi Chaturvedi, who took the risk of starting his cinematic career with a show based on the story of King Chhatrasal. The idea is very good, how is its execution?

VFX of ‘Chhatrasal‘ is quite common. Meaning wherever scenes with VFX come, there is clear animation. It seems clear that most of the acting has happened in front of the green screen. But it would be too much to expect ‘Game of Thrones’ level VFX from a series made on a limited budget. The second animation may not look real, but the choice of colors and background is perfect.

In the series, you will not see the grandeur of Bhansali’s sets’ built-in crores. You will continue to feel the ‘film set’ during the show. The fresh silver color on the props like the sword, shield used in the show will also continue to point towards the tight budget of the show.

King Chhatrasal, who got rid of the kingdom at the hands of the Mughal Sultanate, was undoubtedly brave. But the extra ‘super heroism’ added to his valor in the series is a bit bleak. Like when kid Chhatrasal swims faster than many crocodiles in the water and catches the bell hanging 8 feet above without any support like Nagraj. And then, when Chhatrasal‘s parents cover the gap of about 100 feet between two hills like a farm. Had these scenes been sorted out on the editing table, the show would have been much better.

Ashutosh Rana plays Alamgir Aurangzeb in the show. First of all, if seen from the casting point of view, then the choice of Ashutosh Rana for Aurangzeb is good. Ashutosh fits perfectly in the image of Aurangzeb that is formed in front of our eyes from the paintings. Seeing the show, he seems to have put on some weight for the character of Aurangzeb. A heavy body looks quite real under a royal dress. A middle-aged Aurangzeb must have been like this.

Jitin Gulati is in the role of King Chhatrasal. Jitin arrives in the fourth episode. From the fourth to the twentieth episode, Jitin does not disappoint. Jitin has played the journey of king Chhatrasal from youth to old age in a straightforward manner. For Jitin, who played a minor role in ‘MS Dhoni: The Untold Story’, portraying King Chhatrasal, that too opposite an actor like Ashutosh Rana, is the turning point of his career.

Neena Gupta is the facilitator of ‘Chhatrasal‘. Neena Ji walks in different royal saris from beginning to end, connecting the audience with the story. Jitin’s opposite Vaibhavi Shandilya is good. Rudra Soni in the role of Kid Chhatrasal also deserves praise. Rudra has now become adept at portraying mythological characters in many films and series.

‘Chhatrasal‘ may be weak on many technical parameters, but the story of the show i.e. the life story of King ‘Chhatrasal’, the story of his defeating a dictator like Aurangzeb, is very informative and interesting. The story of Maharaj Chhatrasal, who runs on the principles of secularism and socialism, is in dire need in today’s era.