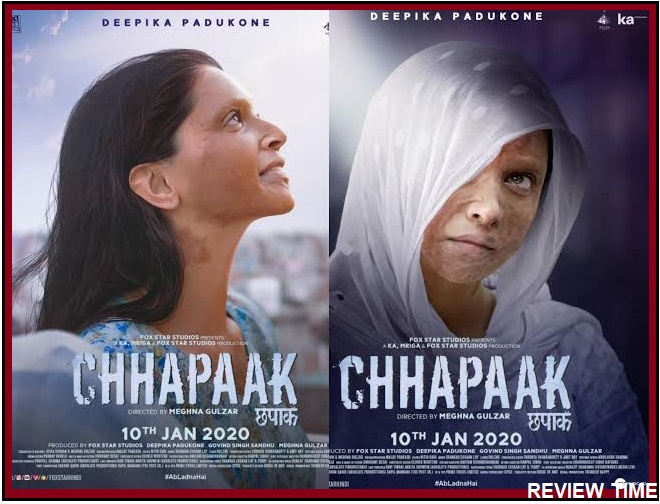 Chhapak Movie (2020) is an Indian drama film. Looking at acid violence through the lens of survivor Lakshmi Agarwal, Chhapak tells the story of a girl (Malati) who comes from an unaffected but humble background. When Malti declined advances made by a man twice her age, she was attacked with acid on a road in New Delhi. With a complete burn on her face, Malati undergoes medico-social rehabilitation, prolonged strings of facial surgery, a legal battle against her attacker and a constant struggle to become financially independent.
Meanwhile, Malati also joins a campaign against acid violence and comes across other victims. She forms an unbreakable bond with the campaign’s founder Amol, but Malti’s game-changing PIL in the Supreme Court of India, along with her lawyer Archana Bajaj, prompts the judiciary to amend the laws on acid violence. A tale of the triumph of the unquestioned human spirit.

Ratings: 3.5 stars
19-year-old Malti (Deepika Padukone) studies in a girls’ school. There is a boy’s school near her school in which she wants Rajesh (Ankit Bisht) to study. Their love story gets eclipsed when the heart of a familiar tailor named Bashir Khan hits Malati. He starts sending romantic messages to her phone which Malti keeps silently ignoring. One day, when he sees Malti and Rajesh walking together, the waterfalls. And then one day he hands a bottle of acid to a woman in his family and pours acid on Malti’s face.

Malti’s life changes. She is scared of herself after seeing her new face after surgery. All the things are decorated and stuffed in the box and keep them aside. In such a situation, his lawyer (Madhurjit Saraghi) regains his courage. Reminds him that only those who threw acid on him wanted to break his spirit. Malti understands this and she decides that she will never let this plan succeed. Meanwhile, he meets Amol Dwivedi (Vikrant Massey), who runs an NGO for acid attack survivors. Malti joins Amol’s organization. She also files a PIL in the court to stop the sale of acid. It would be better to watch the film to know about the story ahead and Malti’s struggle.
Acting
Deepika Padukone has done a brilliant job in acting. He has emphatically expressed the kind of change in the mood during the journey of an acid victim to become an acid survivor. The conversion of fear, anger, and feelings of guilt into liveliness, happiness, and confidence produces a different effect. Vikrant Massey is cast in the role of a serious, stubborn NGO owner, though it would have been better if his role was a bit longer. Madhurjit Saraghi is very comfortable in the role of a lawyer. Deepika and Vikrant’s chemistry has been fantastic. The cinematography of Malay Prakash is amazing. Some of the scenes are filmed amazing, such as dupatta waving scenes of acid servants on a train. Although the film’s cinematography is cinematic, it also has some documentary style. This film is not for people looking for masala entertainment. One drawback of the film is that it could have gone a bit deeper into the world of Acid Survivors.