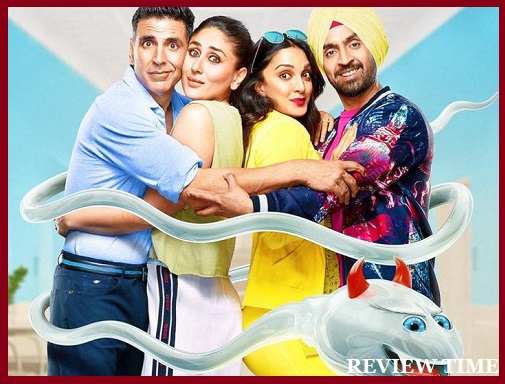 The story of the film is, Varun Batra (Akshay Kumar) and Deepti Batra aka Deepu (Kareena Kapoor) have been married for 7 years, but have no child. He has a good job, a house in Mumbai’s high society, a full family, everything, but the lack of a child always haunts Deepti. In such a situation, Deepti and Varun meet the doctor (Adil Hussain) on the advice of Varun’s sister, where the doctor advises them to become parents with IVF (In Vitro Fertilisation). Both agree and complete the whole process.

But now the villain here becomes his surname ‘Batra’. Apart from Varun and Deepti, the same clinics have come from IVF to become parents Honey (Diljit Dosanjh) and Monica Batra (Kiara Advani). These two couples are completely north-south from each other… One is the High Society Businessman of Mumbai, and the other is the thoughtless Desi of Chandigarh. Now there is a disturbance in the IVF technique by the doctor .. and that disturbance is sperm mix up .. ie honey’s sperm in Deepti and Varun’s sperm in Monica. Now how do the two couples get out of this awkward situation, and they get the happiness of the child or not… The whole film revolves around this.

Akshay Kumar, Kareena Kapoor Khan, Diljit Dosanjh, and Kiara Advani’s film ‘Good Newwz’ is a full-length film. Last year, where 2018 was said to be ‘Goodbye’ with ‘Simba’, the 2019 farewell is happening with ‘Good Newwz’. ‘Good Newwz’ is the complete dose of entertainment, in which there is a cocktail of comedy as well as great acting. The director of ‘Good Newwz’ has not let the film get boring anywhere.

The story of ‘Good Newwz’ is that of Mumbai-based couple Couple Varun Batra and Kareena Kapoor, who have been married for seven years but have not become parents. Both of them are ready to become parents with IVF after much deliberation. Then the entry is of Desi couple Honey (Diljit Dosanjh) and Moni (Kiara Advani). The sperm of both couples get interchanged, and the film has been made about this topic. Director Raj Mehta has kept the film very crisp and not drawn. There is a lot of a touch of comedy from the beginning to the end of the film. ‘Good Newwz’ does not turn into bad Newwz anywhere.

Talking of acting in ‘Good Newwz’, Akshay Kumar (Akshay Kumar) has played Varun’s character well and Kareena Kapoor (Kareena Kapoor) has also supported him brilliantly. Both are very much engaged in the film as a couple. The desi characters of Diljit Dosanjh and Kiara Advani fill many colors as soon as they come on screen. His cool style and dialogue also bring laughter in the face. In this way, all these stars have won hearts in terms of acting.

The music of ‘Good Newwz’ is very good. The film’s songs are bang for the season. The story is very simple and is a funny dose of comedy. In IVF, a subject like disturbance has appeared on the screen for the first time and the director tells the story in a very simple manner. In this way, Good Newwz is a fully entertained film.
Good Newwz Movie Rating: 4 stars
Director: Raj Mehta
Artists: Akshay Kumar, Kareena Kapoor Khan, Diljit Dosanjh, and Kiara Advani