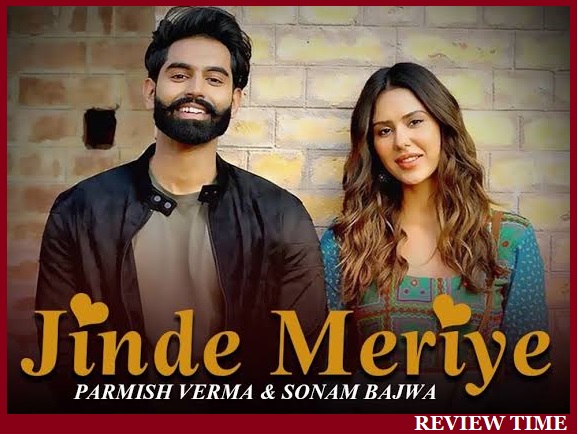 The film has two main characters, Yaadi and Rehmat. Yaadi is a happy and lucky person. Yaadi and Rehmat are childhood friends who turn to Love Birds and plan to get married. Rehmat’s family is against this decision as Yaadi adopts a careless attitude towards his future. To marry Rehmat, Yaadi must stand on his own and build a prosperous career. But Yaadi chooses an illegal way to succeed, which discredits Rehmat, leaving her forever to Yaadi. Will Yaadi be able to win Rehmat back?

Jinde Meriye Review: Actor Parmish Verma and Actress Sonam Bajwa were last seen together in the Punjabi movie Singham. Their chemistry was again appreciated, so putting him on board again is the film’s USP. Among the most awaited films of the year, Jinde Meriye is a romantic drama. It is the story of Yadi (Parmish Verma) and his beloved Rahmat (played by Sonam Kapoor). They are childhood friends who turn lovers. While Yadi is a carefree boy in college, Rahmat is an honest student. The daughter of a professor (Hardeep Gill) who is a single parent, she dreams of a simple and honest life. On the other hand, Yadi wants quick success and has all the luxuries. They both want to get married but Rahmat’s father is against it as he feels Yadi is not the right guy for him due to his attitude towards life.

As a result of some unpleasant events, Rahmat has to choose between his father and his lover. Of course, she favors her father. They both move to Scotland and start a new life. Like any normal Punjabi family, the father gets an NRI for his daughter. Meanwhile, Yadi, who is madly in love with Rahmat, makes for England against all odds. The film gets another twist when he joins a drug mafia to realize his dreams. With the ambition of proving Rahmat’s father that he has all the wealth and convenience to save his daughter, he does everything illegal. He has the love of his life. The film has another angle and the best part about it. Even after having the cliché story of a man and girl in love who goes through a separation that leads the man on the wrong path, it focuses on how the use of drugs is killing millions. It also highlights the fact that not every story can have a happy ending, especially when the protagonist indulges in wrong acts, it is a touch of reality. So, the base is probably old but the treatment is fresh. As far as acting is concerned, the supporting cast keeps the story as strong as the lead pair. However, Parmish is unable to reflect the feelings that his character needs to show. Parmish and Sonam look good together. Personally, Sonam’s story did not have a strong character and is sometimes dominated by male actors. All in all, it has its cons and bad, but you will not regret it after watching it.